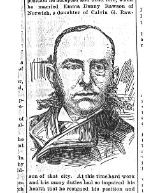 I wish, for Florence’s sake, that Dr. Henry Louis Hammond had been a better-looking man. I wish, at least, that he hadn’t worn those ridiculous whiskers sticking out from the sides of his face—dundrearies, they’re called. Although any hint of attraction between Henry Hammond and Florence Mellish is entirely invented, I wish I could have provided the fictional Florence with a more compellingly masculine fictional romantic interest. But I set myself the rule that, if I found a picture of any character based on a real person, I would be faithful to that picture, and an image of Dr. Hammond appeared in the Putnam (Connecticut) Standard on October  21, 1896, when he was running for a seat in Congress (an election he ultimately lost). From the moment a photocopy of that picture arrived in the mail, I could no longer imagine him any other way. Dr. Hammond had thinning hair, a bulbous chin, and dundrearies.

Henry Hammond was well into his fifties, a busy man with a wife and many other responsibilities, not to mention less than robust health, when Bertha disappeared, and I wonder what it was that motivated his loyalty to the Mellish family. He was described as their family physician, it’s true, but he was also an officer in the Windham County Medical Society, a surgeon at an area hospital, a member of the Killingly School Board, an active Mason, Odd-Fellow, Elk, and Knight of Pythias, and an organizer for the Ancient Order of United Workmen, a benevolent fraternity that offered life insurance to professional men and laborers alike.

What was it about the Mellish family that captured Dr. Hammond’s sympathy?  Why would he, as John Mellish explained in a public letter of gratitude “volunteer to act in the search. . .without compensation for the time which he expended and beyond this has been kind and generous to us through these months of anxiety and sorrow, and is still ready to give efficient aid . . . “? Did Henry Hammond do it for Florence, or John Mellish, for Sarah, for Bertha? For them all?  Was it out of pity? Respect? The pure goodness of a generous heart?

Perhaps Henry Hammond took a special interest in the Mellish family out of consideration for the two families’ long association. Perhaps, on his return to Dayville in 1892, the Reverend Mellish recalled with gratitude how years earlier, when young Henry was away at Harvard Medical College, his father Justin, twenty years the minister’s senior but full of energy and good-humor, had cordially welcomed him to the village. Perhaps John Mellish explained to the younger man that Dr. Justin Hammond and his wife Susan had been their close and dear friends for all of the Mellishes’ first short but happy time in Dayville. I don’t know this to be true, but I can only imagine that some sort of bond had been forged between the two families long before Bertha disappeared.

I wonder, too, if Dr. Hammond’s visit to the Hedden farm to confront Henry Robinson about his harassing letters to the Mellish family took place before or after his wife Emma’s death on September 13, 1898. (Emma Hammond died of pneumonia, unexpectedly, after a week’s illness. Of all the real people who provided a name and something of a life to a fictional character, I owe Emma Hammond the most sincere apology. I know absolutely nothing about her character, have no hints or clues on which to base my less than flattering portrait.) Even as a widower, then, Henry Hammond continued his loyal service to the Mellish family, helping them through the Robinson ordeal, carrying messages, testifying at the trial.

I know Dr. Hammond left Dayville, but I don’t know when. He married again, to a sister of the Chicago merchant Montgomery Ward. This union, like his marriage to Emma, was childless.  The couple lived in Niles, Michigan, but Henry died in Texas on July 17, 1910, at the age of sixty-seven, on his way home from California where he had been taken for his health. He was buried first in Michigan, but in December of that year, his body was brought back to Connecticut. He now lies in Dayville’s High Street Cemetery with his parents and brothers and sisters, nowhere near the Mellishes.