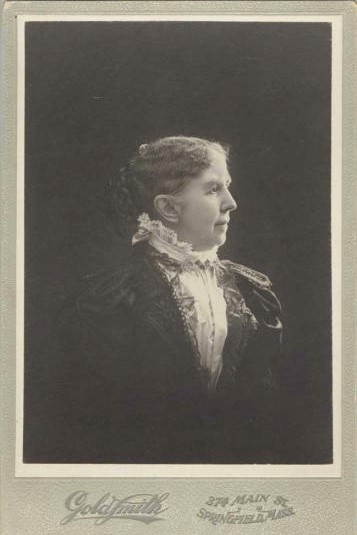 Much of my sense of  President Elizabeth Storrs Mead—self-possessed and self-righteous, coolly withering in her judgments—is,  I have to admit, based on Elizabeth Slater’s letters, hardly an objective source. But another incident, recounted by Dr. Mary Chandler Lowell as a positive example of the president’s sense of humor and moral leadership, does nothing to dispel that image. “Old Doc” Lowell, writing to the surviving members of the Class of 1897 on the fiftieth anniversary of their graduation, recalled the story of a student’s remark to the president at the end of a freshman reception. “I wish to say good night,” Lena said, “and to tell you I have enjoyed myself very much.” According to Dr. Lowell, Mrs. Mead “looked amused and replied rebukingly: ‘I hope, my dear, after you have been here a short time you will learn to enjoy something besides yourself’.” An unkind way, I think, for a college president to display her wit, at the expense of a freshman trying to be polite.

But I do want to give President Mead her due, and to confess that I have no idea how she reacted to Bertha’s disappearance, no evidence that she blamed the Mellish family or gave “La Petite” to the press. Mrs. Mead was a capable and accomplished administrator, described by many as charming and attractive, who, in her ten years as president, took Mount Holyoke from a seminary to a college, revoked many of its more antiquated rules and regulations (although she still would not allow the use of men’s lower garments as costumes in student plays. Men’s shirts and coats were fine; trousers, even those borrowed from male relatives or purchased new, were forbidden), encouraged student self-government, and supervised the rebuilding of the college after the fire of 1896.

I will allow Mrs. Elizabeth Slater Rogers the last word on Mrs. Mead. “For four years it was my happy privilege to be associated with Mrs. Mead at Mount Holyoke College,” Mrs. Rogers wrote in 1917, soon after the former president’s passing. “The memory of those years I cherish as one cherishes the memory of gracious womanhood and gentle deeds.”